The Pliocene epoch was the last time in Earth history when atmospheric CO2 concentrations approached modern values (~400 ppmv) whilst at the same time retaining a near modern continental configuration. The IPCC 5th Assessment report chapter 5 (Masson-Delmotte et al., 2013) states that that model–data comparisons for the Pliocene provide high confidence that mean surface temperature was warmer than pre-industrial (Dowsett et al., 2012; Haywood et al., 2013). Global mean sea surface temperatures have been estimated to be +1.7°C above the 1901– 1920 mean based on large data syntheses (Lunt et al., 2010; Dowsett et al., 2012). Exiting climate model simulations have produced a range of global mean surface air temperature of +1.9°C and +3.6°C relative to the 1901–1920 mean (Haywood et al., 2013). Model simulations have indicated that meridional temperature gradients were reduced (due to high latitude warming), which has significant implications for the stability of polar ice sheets and sea level in the future (e.g. Miller et al. 2012). Compilations of vegetation (Salzmann et al., 2008) have indicated that the global extent of arid deserts decreased and boreal forests replaced tundra, and climate models predict an enhanced hydrological cycle, but with a large inter-model spread (Haywood et al., 2013). The East Asian Summer Monsoon, as well as other monsoon systems, may also have been enhanced (Zhang et al. 2013). Although climate model simulations for the Pliocene were assessed in the AR5, these simulations were not derived from the same model/same resolution as the CMIP5 future projections, thus reducing the communities’ ability to assess and compare changes in global and regional Pliocene climates, vis-à-vis similar predictions of future climate change (Haywood et al., 2013).

We propose a CMIP6 time-slice experiment for the Pliocene to understand the long term response of the Earth’s climate system to a near modern concentration of atmospheric CO2 (longer term climate sensitivity or Earth System Sensitivity), and to understand the response of ocean circulation, Arctic sea-ice, modes of climate variability (e.g. ENSO), as well as the global response in the hydrological cycle and regional changes in monsoon systems. A Pliocene simulation will be of high societal relevance because of its potential to inform policy makers on required emission reduction scenarios designed to prevent global annual mean temperatures increase by more than 2 to 3 °C in the long term (beyond 2100 AD). The proposed CMIP6 simulation for the Pliocene is relevant to two of the WCRP Grand Challenges. This includes Clouds, Circulation and Climate Sensitivity because of the enhanced CO2 forcing (contemporaneous with modern CO2 forcing), providing a unique opportunity to examine an equilibrium climate state to a near modern concentration of atmospheric CO2. The pattern of polar amplification preserved Pliocene climate archives can be compared directly with the latest generation of CMIP models making a valuable contribution towards addressing the potential polar amplification problem. Through the analysis of Pliocene polar amplification in CMIP models, and examining the geological interpretation of a seasonally sea-ice free Arctic Ocean during the Pliocene, our CMIP6 simulation will also address the WCRP Grand Challenge of Changes in the Cryosphere. Whilst uncertainty exists in Pliocene sea level reconstruction, IPCC AR5 states with high confidence that Pliocene sea-levels were higher than the preindustrial era, with a number of independent methods indicating a sea-level rise of between 10 and 20 m. This indicates potential long term instability of both the Greenland and Antarctic Ice Sheets (Miller et al. 2012) with CO2 concentrations at approximately 400 ppmv.

CMIP6 Pliocene experiments will be used within the Pliocene Ice Sheet Model Intercomparison Project in order to better constrain the climatological forcing in ice sheet model simulations for the Pliocene in the future. There is a well-organized and highly active of community of Pliocene climate modellers within PMIP, with the Pliocene working group being one of the most successful working groups within PMIP3. The working group is closely associated with the United States Geological Survey (USGS) who has had a highly productive core program focused on Pliocene environmental reconstruction for the last 25 years, and their data has been used to underpin almost all model-data comparisons performed for the Pliocene. Thus, CMIP6 can expect a high degree of continued support and new Pliocene data sets from the USGS for comparison with model outputs. The experiment will address the broad scientific questions:

The full description of the experiment can be found on the PlioMIP2 web site. 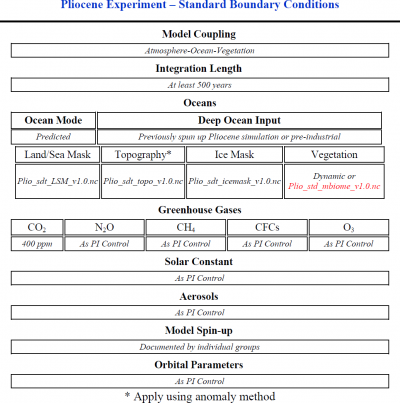 Click on the table to get a bigger version