Make sure you use the final version of the LM BC!

The basic principle is that we should strive to include all relevant transient forcings over this period if the functionality exists in the model, noting that conformability with the CMIP5 controls and 20th Century transient is crucial. 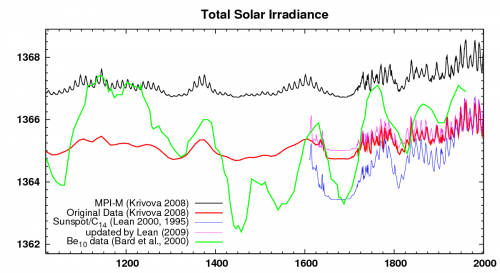 Time series of TSI (Wm-2) from 800AD to 2000. For the COSMOS (MPI-M) Millennium simulations (black curve), a 11 year cycle was added for consistency over the entire period.

Notes: We will impose an 11 year cycle on pre-sunspot reconstructions for consistency of the spectrum of natural variability. Additionally, we will give a spectral set of irradiance changes based on modern variability observed by satellite (Lean).

The evolution of CO2, CH2, N2O over past 2 millennia table has been provided by Fortunat Joos (University of Bern). Methods and references are provided in the downloadable file.

The following orbital parameters parameters should be used, if they are not internally calculated.

The parameters' table has been supplied by Gavin Schmidt (GISS).

Over the period 0-2100 CE, the parameters are well approximated by the following linear regressions:

Solar forcing for PMIP3/CMIP5 simulations of the last Millennium

Solar variations and volcanic eruptions are considered the most important natural drivers of climate change. Over the last millennium orbital changes have been relatively small but changes in the strength of solar irradiance have been made responsible, for example, for the transition from the Medieval Climate Anomaly (MCA) to the Little Ice Age (LIA). Climate models usually take into account variations of the solar forcing by modulating the solar “constant” as a measure for the total solar irradiance (TSI). More sophisticated models are able to deal with spectrally-resolved irradiance variations and/or include the effects of modifications of (stratospheric) ozone by UV radiation. For the PMIP/CMIP5 protocol we will only consider TSI variations.

Observations and reconstructions of TSI

Space based radiometers have monitored the Sun’s TSI since 1978, covering more than two 11-year cycles. Irradiance values are quite similar during the most recent cycle minima, which suggests the absence of a long term trend in recent times (Fröhlich and Lean, 2004). Earlier reconstructions of historical TSI (Lean et al., 1995; Reid, 1997; Lean, 2000; Bard et al., 2000) assumed that longer-term variations were larger than the 11-year cycle. Variations of proxy indicators (14C, 10Be cosmogenic isotopes in tree rings and ice cores) were combined with the variability range of Sun-like stars and resulted in reconstructed TSI time series where the 17th century Maunder Minimum was 0.2 to 0.6% (2 to 8 Wm-2) below contemporary cycle minima values. Recent reassessment of stellar data (see Lean, 2005; Krivova et al., 2007) and removal of suspicious drifts in instrumental and proxy data have, however, drastically reduced the amplitude of the long-term change in TSI. TSI reconstructions based on solar reconstructions alone (Wang et al., 2005; Krivova et al., 2007) show an amplitude in the background component that is only 0.27 times that of Lean (2000). Thus, the secular increase in the cycle-averaged TSI since 1700 is about 1Wm-2. Krivova et al. (2007) reconstruct an increase in TSI since the Maunder Minimum of 1.3 Wm-2 with lower and upper limits of 0.9 and 1.5 Wm-2, respectively.

TSI reconstructions that go back in time beyond the Maunder Minimum also show significant differences in the long-term variation. Beyond the sunspot record, cosmogenic isotopes, such as 10Be or 14C are used. The discrepancies (Muscheler et al., 2007; Bard et al., 2007; Bard and Frank, 2006) stem from different methods to account for non-solar effects and different scaling factors to arrive at TSI. The recent reconstruction provided by the Max Planck Institute for Solar System Research (MPI-S) (Krivova, pers. Comm., 2008) is relatively flat between 800 and 1800 (Figure 1) whereas Bard’s (2000) reconstruction includes a pronounced Medieval solar maximum and an all-millennium minimum during the Spoerer Minimum in the 15th century. This discrepancy is mainly related to the methods used to translate isotope concentrations to TSI variations. For the last 400 years sunspot data appear to be the best choice as the underlying basic data but isotope-based reconstructions exhibit differences to the sunspot data. This raises the question, if radionuclide-based data should be used throughout the last Millennium (Muscheler, pers. comm., 2009).

Presently several groups are working on new reconstruction or on extensions of existing data sets. Most of them would be available for the PMIP community. However, at present (May 2009) none is “officially” published. Lean (pers. comm., 2009) (Figure 1) combined the Lean (2000) time series and the Wang et al. (2005) background information to produce a TSI reconstruction back to 1610. This could be combined with cosmogenic isotope records to be extended back in time. Krivova et al (pers. comm., 2008) have extended the Krivova et al. (2007) dataset back in time and have provided TSI data for the COSMOS Millennium simulations carried out in Hamburg (http://www.mpimet.mpg.de/en/wissenschaft/working-groups/millennium.html). The group at MPI-S is presently finalizing the spectral part and intends to publish these data sets together. For the last 400 years, the amplitude of variation in the Krivova and Lean curves are quite similar (Figure 1).

Figure 1: Time series of TSI (Wm-2) from 800AD to 2000. For the COSMOS (MPI-M) Millennium simulations (black curve), a 11 year cycle was added for consistency over the entire period.

Experience made in recent climate model applications (Ammann et al., 2007, COSMOS Millennium experiments) indicate that TSI changes of the order 1Wm -2 will have quite limited impact on global warming/cooling. The models give roughly a response of 0.1K for 1 Wm-2 change in TSI variation (not to be confused with climate sensitivity for CO2 changes), which is not inconsistent with observations (Lean and Rind, 2008). Given the state-of-the-art estimate of 1Wm -2 change from the Maunder Minimum to now, TSI variations alone can hardly explain the global or hemispheric temperature changes found in temperature reconstructions, for example for the MCA-LIA transition. In the light of new findings (e.g. Trouet et al., 2009) it appears likely that additional feedbacks (modulation of ENSO, NAO, MOC) need to be invoked to explain the observed temperature patterns. Since the realization of these feedbacks in various models is expected to be quite different for different models, this will be an interesting research topic for the PMIP3 Last Millennium simulations. Moreover, ensemble simulations should be performed to assess the role of external forcing vs. internal variability.

Solar physicists agree that solar variations, at least in terms of TSI variations, were smaller than previously thought over the last Millennium. There are several new reconstructions of TSI available to be used for the Last Millennium simulations suggested for PMIP3/CMIP5. At present (May 2009) none of these reconstructions is “officially” published. By the time of the PAGES OSM in July, PMIP should decide on one forcing time series as a “standard” forcing. This should be one of the “new” reconstructions reflecting the present state-of-the-art and the forcing will probably be one with a relatively low amplitude (0.1% change from Maunder Minimum to now). Groups should be encourages to do sensitivity experiments either with different TSI datasets or with different scaling factors.